An ADU startup enters Monterey County, and promises to cut through all the red tape.

An ADU startup enters Monterey County, and promises to cut through all the red tape. 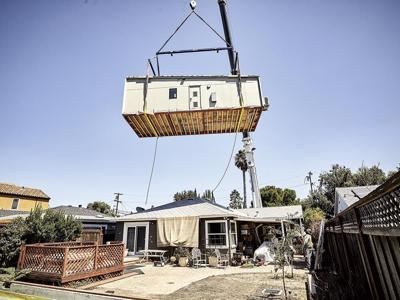 When it comes to solving the housing crisis, speed matters – it’s one thing to have a housing unit approved, it’s another for it to actually get built.

Enter Abodu, a Silicon Valley-based startup that factory-builds slick accessory dwelling units (ADUs) and puts a premium on speed – in October, the company delivered one to a property in San Jose just 21 days after the property owner inked the contract. Because Abodu had already done the groundwork with San Jose’s planning department – all the ADUs are built to specs pre-approved by the state – permitting only took about an hour.

On Nov. 1, Adobu opened up its territory into Monterey County, so local homeowners now have an option to add units quickly. Abodu handles everything, including craning it onto the property, laying the foundation and setting up the utilities, all for a price that is fixed when the contract is signed. (Abodu’s cheapest unit, a 340-square-foot studio, starts at $199,900.)

John Geary, co-founder and CEO, says the company, which was founded in 2018, has “received a ton of interest in Monterey County in the last two years,” but is only now able to serve it. That’s because, he says, the company has to do the groundwork first to line up contractors who are ready and able to deliver and install the homes in a tight timeline.

“We’ve intentionally held up on Monterey [County] until we can serve it full bore,” Geary says. “We don’t want a half-baked product.”

The company has no local office, but locals can tour a showroom in Redwood City that is akin to a car dealership. One can buy an ADU that’s already built, or customize it, which adds about four to five months to the timeline.