“There’s a housing crisis, and Abodu wants to solve it fast with quality backyard homes”

Housing prices have soared in many markets across the United States over the past decades as populations have grown, square footage has increased, and new unit construction has languished. Houses that were once tens of thousands of dollars have transformed due to zoning restrictions into million-dollar manses, leaving millions without affordable housing.

Few regions have been as hard hit by housing prices as the Bay Area, where the median price for an existing home last year averaged just shy of $1 million. For John Geary, who grew up in Cupertino and whose father is a single-family home real estate developer, “I’ve seen the just under-building of housing occur my entire life here.”

He eventually linked up with Eric McInerney when the two worked at Bain, and the two quickly became friends, living together in Chicago. Both were housing nerds and talked about the housing crisis regularly, and eventually, they started looking at a way to solve the affordability problem.

While California has handled the crisis with the glacial fervor you would expect of the republic, one major change on housing has been new state laws that have made it easier to build an ADU (accessory dwelling unit), which are smaller home units tucked into existing properties (for example, a one-bedroom detached home in the backyard of an existing four-bedroom house).

The changes around these housing units became more visceral for Geary when his father, who was developing a subdivision in San Juan Bautista south of San Jose, was mandated to include 15 ADUs in a neighborhood plan for 45 lots. There weren’t great options for including the housing units at any reasonable price, and other homeowners who had attempted to construct ADUs came to a similar conclusion — indicating a gap in the market that could potentially be filled.

Geary and McInerney saw an opportunity to capitalize on the sudden openness for ADUs in California, and launched Abodu. The startup, which is based in Redwood City in the Bay Area, offers three customizable housing models that it then manufacturers to order and can deliver to homeowners in as little as about 12 weeks.

The startup raised $3.5 million for a seed round led by former TechCrunch writer Kim-Mai Cutler, who is now a partner at Initialized Capital. Her famous “vomiting anarchists” essay helped to propel housing issues to public consciousness in the Bay Area and throughout the tech industry. 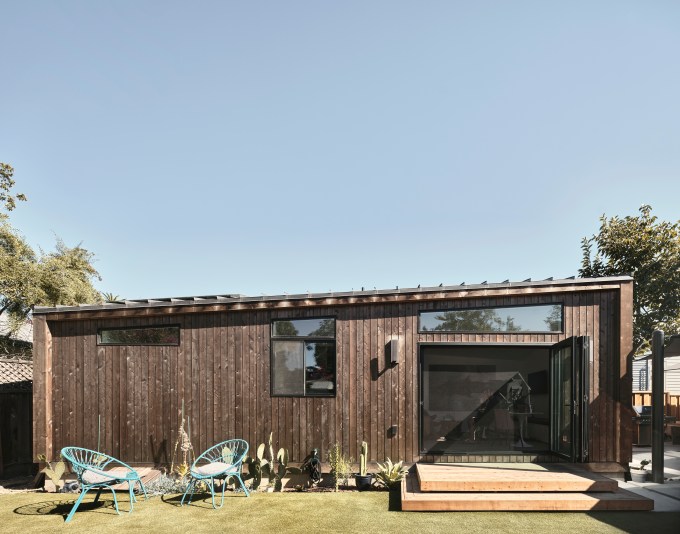 Abodu offers three housing models today: a studio, a one-bedroom, and a two-bedroom, with prices starting at $189,000, $199,000 and $259,000 respectively. Those prices include standard installation, foundations, and utilities, but exclude city permit fees, which Geary says can range from $1,500 to $7,000. Additional, more premium options and finishes are available as well. Homeowners can buy the units online or visit the units in-person at the company’s showroom in Redwood City.

"How California Set Off a Backyard Apartment Boom"

With a state law easing restrictions on accessory dwelling units, granny flats are proliferating in L.A. and other cities — and pre-fab options may make these tiny houses even more common.